Back in high school, when my dear mother was desperate to help me with the never-ending stream of problems that I faced, she opted to try healing with horses. Specifically horse back riding, or hippotherapy, which by the way, has nothing to do with hippos.

This is the part where I should explain my feelings regarding hippotherapy. However, you should know that I have great talent at blocking out huge chunks of time that may or may not have been traumatic. What you are about to read is my fuzzy recollection of my first day of horseback riding therapy. What is clear, however, is the fact that that day will never be forgotten.

I remember my mom and I walking into the place. The first thing that hit us was the smell. It was hard for me to get past. Everyone else seemed immune, or at least, mostly unaffected by the stench.

We were greeted by a cheery lady (her real name I can’t remember, so I will call her Susan) who gave me a helmet to wear. I think it was blue. But who cares what color it was.  Bottom line: I was HOT. See for yourself:

We went and sat with her in a tiny room with appalling lighting. My mom explained why I was here and how sensitive I was to, well, everything. She explained my severe sensory issues and my recent diagnosis of ASD. Susan said she understood my situation. That was too easy, I thought.

Susan walked my mom and I through a short hallway that led to a door. “This is the barn,” she said. The door opened up to a massive open space covered with hay.

Then she walked us to another door that opened up to stables. We opened the door and I nearly lost bladder control because this was the first thing I saw:

“She’s the largest breed of horse in the world,” said Susan. Also, the most insane-looking.

Well, that was all I needed. Now that I was reduced to a pathetic crying blob in a helmet, Susan began to understand the seriousness of my situation.

I was ushered quickly into the large barn where I waited for my horse.

My horse, I thought. I imagined something regal, majestic, and strong. Something along the lines of this:

Heck, I’d even settle for this:

However, when my horse came into the barn, it looked more like this:

Ok. So it wasn’t what I had pictured in my mind….at all. Still, I would not give up hope. His name was Neil, I was told. “He’s very relaxed and he just loves everyone!” said Susan with delight.

Neil was a nearly as round as he was high. A blue blanket with yellow stars covered his back. I am unable to comment about Neil’s intelligence level at this time, but I’m certain it wasn’t too high. Still, there was an strong air of calm about him that I definitely appreciated.

I walked up a set of stairs and was placed onto Neil’s back. Although he could’ve passed for a miniature pony, I still felt disoriented and high-up off the ground. My grip tightened on his reins as we slowly started to walk out the barn and to the trails. The cheery lady guided Neil and another older woman walked next to me as I rode.

We barely walked three feet though when Neil stopped abruptly and I heard plopping sounds somewhere behind me. “Oh, he’s very relaxed,” Susan said, “he must like you!”

To my horror, I quickly realized that Neil was a popping-machine. It was practically his favorite activity. Outside the barn, the two women guided Neil down a short dirt path. “We’re going to try this hill now, ok?”

She made that sound like a question, but I knew she wasn’t really asking me. It was more of a command: WE ARE GOING OVER THE HILL KID.

With my already over-stimulated state from the stable trauma, and my terrible body-spatial awareness, going over the hill wasn’t going to be pretty.

I basically thought I was going to die. Neil probably thought so too, although he never said anything. He just kept pooping. 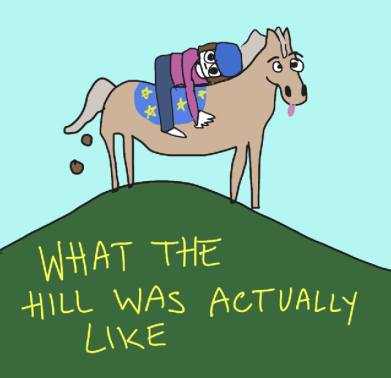 When I thought it couldn’t possibly get any worse, Susan said “Let’s walk Neil through this stream up here. Maybe he could stop and have a drink too.” Susan’s joyous spirit was making me nauseous. Maybe Neil could poop on her.

After several upsetting, sensory-crushing experiences, all sense of perspective was lost. Everything seemed bigger, more horrible and dangerous. This was no stream we were crossing… 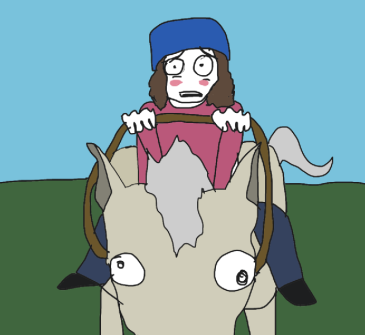 Nobody cared though, so I buried my face into Neil’s mane and placed a death grip on his face. He probably disliked that, but again, he didn’t say anything to me. He pooped though. 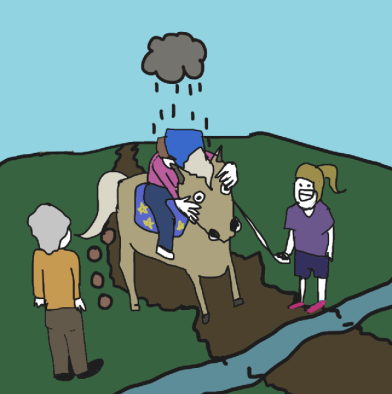 Finally sensing my distress, Susan told me that we were going to walk around the ring. The ring was a dirt oval surrounded by a wooden fence. When we got there, another teen girl was riding a muscular black horse. I entered the ring, and the difference between the two of us and our horses was striking, if not, hilariously noticeable.

I sensed a air of superiority from her. Neil stopped pooping, so something was definitely going on. She was a professional rider on a champion horse. I knew she thought of me as one of “those kids” on “that horse.” And actually, I was. YEA. I WAS ONE OF THOSE KIDS ON THAT HORSE. So as she left the ring, I said out loud: 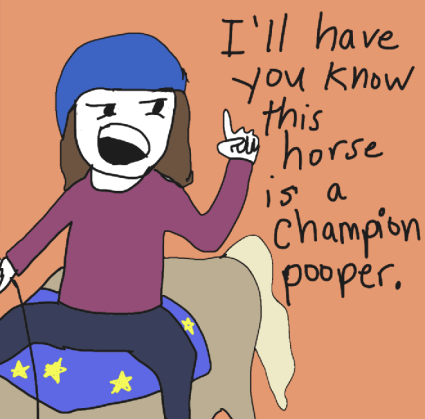 I’m not sure she heard me, but that doesn’t matter. What matters is that Neil and I survived steep mountains and the raging river. We braved the dirt paths and Susan’s annoyingly sunny demeanor.We were a united force. We were one.

And so my day of therapeutic horseback riding came to an end. I rode around the ring endlessly, somewhat enjoying the consistency of the circle. No hills, or waterways. Just dirt. It was all so…. unsurprising. Just how I like it.

And I learned that Neil may not have been the most impressive-looking creature, but he certainly had the confidence to carry me – having meltdown while clawing at his eyeballs – without flinching. I guess that’s why he’s a top-notch therapy horse. I’d bet ya that that other horse couldn’t do HALF of what Neil does.

By the way, here is a picture of the type of horse that Neil is. This isn’t him, but it looks just like him.